Poet Stanley Kunitz died this past weekend at age 100.

He was at his home in New York City. I'd like to think that part of him was in his garden in Provincetown.

Poetry is ultimately mythology, the telling of stories of the soul. The old myths, the old gods, the old heroes have never died. They are only sleeping at the bottom of our minds, waiting for our call. We have need of them, for in their sum they epitomize the wisdom and experience of the race.

I'm curious. I'm active. I garden and I write and I drink martinis.

Immortality? It's not anything I'd lose sleep over. The deepest thing I know is that I am living and dying at once, and my conviction is to report that self-dialogue.


The best thing anyone can do now is to put breath into his poems.

Get started with one of my favorites by him - "The Portrait" - you can hear him read it there too. 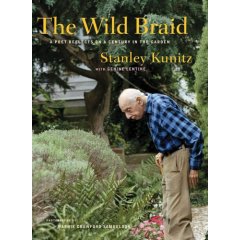 Some places to visit Stanley
The Wild Braid: A Poet Reflects on a Century in the Garden

read some of his poems at:
http://www.poemhunter.com/stanley-kunitz/poet-6802/


Listen to a remembrance of Stanley by Melissa Block from NPR