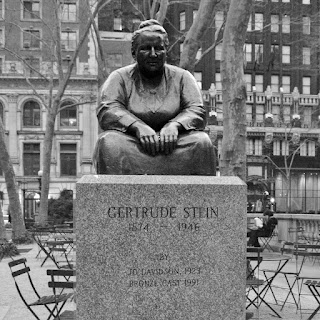 I had lunch recently with friends outside at Bryant Park in New York City and we sat near a statue of Gertrude Stein. The statue portrays Stein looking quite Buddha-like, which might be because she was a philosophical touchstone for the group she dubbed "The Lost Generation" in Paris in the post-WWI days.

I have been reading about Gertrude Stein and Alice B. Toklas since that lunch visit with her. Stein was born in Pennsylvania and grew up in Oakland, California. Alice was born in San Francisco and grew up in Seattle, Washington. They met in 1907 in Paris and moved in together three years later becoming lifelong friends and lovers.

I believe I only learned about the couple back in the late 1960s when people talked about Alice B. Toklas brownies. I remember seeing the film I Love You, Alice B. Toklas in 1968. It is a mostly-forgettable romantic comedy starring Peter Sellers and very much a Hollywood version of the 1960s counterculture. The title refers to Alice's recipe for hashish (cannabis) brownies and the film doesn't get into the lives of Alice or Gertrude, but that allusion led me to look again at some of Stein's writing, particularly the poetry.

I knew of Gertrude Stein only as someone who mixed in with Hemingway and the other Americans in Paris back in that time. I discovered some of her writing in college, but her poetry baffled me. Avant-garde was not for me.

Here's a poem of hers.

A Carafe, that is a Blind Glass

A kind in glass and a cousin, a spectacle and nothing strange a single hurt color and an arrangement in a system to pointing. All this and not ordinary, not unordered in not resembling. The difference is spreading.

A longer poem of hers, such as "Stanzas in Meditation," was just more lines of confusion. It is the kind of poetry that often makes people feel stupid and makes them not want to read more poetry.
Here is the opening of "Hotel François 1er."

It was a very little while and they had gone in front of it. It was that they had liked it would it bear. It was a very much adjoined a follower. Flower of an adding where a follower.
Have I come in. Will in suggestion.
They may like hours in catching.
It is always a pleasure to remember.
Have a habit.
Any name will very well wear better.
All who live round about there.
Have a manner.
The hotel François Ier.
Just winter so...

I just don't know what to do with those lines. And having read a pretty good number of her poems, I recognized how much she loved repetition and playing with words and phrases (and hated commas) and didn't seem to see much of a separation between poetry and prose.
Here is the start of "New."

But Gertrude Stein was certainly central to the Parisian art and literary world and Alice B. Toklas, her lifelong companion and her "secretary," became the people to know. Expatriate American and English writers and artists from far and near attended her soirees. Hemingway, Fitzgerald, T.S. Eliot (Did he wear a suit to the parties?) and Sherwood Anderson claimed influences from her. James Joyce wrote his stream-of-consciousness Ulysses after meeting with Stein. Coincidence? Perhaps, or perhaps a meeting of like-minded writers. Stein also helped launch art careers for Henri Matisse, Juan Gris, and Pablo Picasso.

More than Stein's writing, I think her legacy will be around those who came to her at  27 rue de Fleurus in Paris. Tourists still visit the location in the 6th arrondissement on the Rive Gauche. ("La Rive Gauche pense, et la Rive Droite dépense”).

Their relationship is an interesting story and I read a long time ago the "autobiography" and enjoyed that much more than her poetry. But maybe I would have to hear her read her poems aloud in that Paris apartment surrounded by Eliot, Fitzgerald, Hemingway, and the others to get the full effect. And a few of those fudge brownies might have helped my comprehension too.

Alice was not as outgoing as Gertrude and she was much less famous, but she was there for everything that went on in that apartment and with Stein.

In 1933, Stein published The Autobiography of Alice B. Toklas. It is an odd memoir of her life in Paris in that it is written in the voice of Toklas rather than her own. Whose autobiography is this? The book was a bestseller and Stein - and Alice to a lesser degree - become well-known figures.

When Alice B. Toklas was asked to write a memoir, she refused. But she did agree to write The Alice B. Toklas Cook Book. I'm not a cook but I paged through the book at the library and it is at least partially a memoir of the people and the times when those recipes were used.

Alice's recipes are not only Parisian but are inspired by her travels. The section titles suggest what you will find. “Dishes for Artists,” tells about her trying to find the perfect recipe to fit Picasso’s peculiar diet. And yes, her “Haschich Fudge” is included. She says that eating it often means “ecstatic reveries and extensions of one’s personality on several simultaneous planes.”

Stein was supposed to have said as soon as she met Alice that they would be together forever. And they were, in fact, they lived together until Stein’s death in 1946 and are buried side by side in Paris’s Père Lachaise Cemetery.

Kathy Bates as Gertrude and Owen Wilson as time-traveling writer Gil
getting some feedback on his novel in Woody Allen's Midnight in Paris.

In my ADD, stream-of-unconsciousness, and generally enjoying the adventure of going down rabbit holes, all this led me to rewatch Woody Allen's film Midnight in Paris (It is on Amazon Prime - free if you are a Prime customer.). It is such a beautiful film and it is the closest I will come to seeing Hemingway, Scott and Zelda, Gertrude Stein, and all that artsy crew back in time. I've heard Woody talk about the film and he admits it is more nostalgic than historic. Hemingways was much more boorish and Zelda was not as crazy day-to-day, but he went with our impressions of them and that time that has become an alternate reality. Movies do that.

I suspect that if I was there in the 1920s, it might not seem like such a moveable feast. But maybe if Gertrude was reading her poetry aloud with Zelda at my side and a few of Alice's brownies inside me her poems might have made a very different impression on me.

An earlier version of this article appeared at One-Page Schoolhouse

Visit our website at poetsonline.org
Posted by Ken Ronkowitz on 9/13/2021 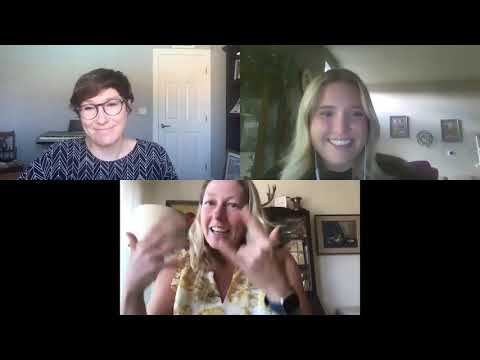