This month we are looking at two famous poets and two similar and often confused literary terms.

Carl Sandburg was born in 1878 and died in 1967. He was a very American poet, biographer, journalist, and editor. He won three Pulitzer Prizes: two for his poetry and one for his biography of Abraham Lincoln. During his lifetime, Sandburg was widely regarded as a major figure in contemporary literature, especially for his poetry, including Chicago Poems (1916), Cornhuskers (1918), and Smoke and Steel (1920). He enjoyed broad appeal as a poet in his day, perhaps because his plain language and the breadth of his experiences connected him with so many strands of American life.
I was introduced to Sandburg in school with some of his most anthologized poems, including "Fog" which we use as a model for this prompt.

Thomas Stearns Eliot was born in 1888 in St. Louis, Missouri and was a contemporary of Sandburg, though they are not very similar (and I suspect they were not friends). He moved to England and became a British subject in 1927. He wrote widely from The Waste Land and Four Quartets to Old Possum's Book of Practical Cats (which was the basis of the Broadway show Cats) as well as prose, and works of drama. He won the Nobel Prize for Literature in 1948. T.S. Eliot died in 1965.
I first encountered Eliot in college. As much as I had liked Sandburg's simple poems, I fell under the spell of Eliot and the idea that poetry should be complex and not easily understood on that first reading. My college copy of Four Quartets is full of margin notes about things I had to research to understand.
My taste in poetry and my own poetry today is probably closer to Sandburg than Eliot. It might seem that pairing them is unlikely but this month we are doing that by figurative language and one image.
Figurative language is essential in poetry. Ezra Pound said that his fear with modern poetry that it was becoming "prose with line breaks." He was not a fan of narrative poetry that could be read like prose with complete sentences and little or no figurative language.
Metonymy is often confused with synecdoche. These literary devices are similar but can be differentiated.
Synecdoche is a figure of speech in which a part of something is used to signify the whole. To ask for someone’s “hand” in marriage of course means to ask the whole person. "Boots on the ground" signifies soldiers. When they ask at checkout "Paper or plastic?" they mean the type of bag made from that material. The "stars and stripes" signifies the entire U.S. flag. "Suits" can mean people in business. "All hands on deck, I see a sails" uses two synecdoches.
Metonymy is a figure of speech in which one word is used to replace another to which it is closely linked, but, unlike synecdoche, it is not a part of the word or idea it represents.
Shakespeare writes “lend me your ears,” and "ears” are not meants as a synecdoche for people but as a substitute for “attention.” “O, for a draught of vintage!” write Keats’s in “Ode to Nightingale,” with “vintage” standing in for “wine.”  A very metonymy-heavy sentence is "The press got wind that the feds were investigating management in Hollywood.

In our two model poems - Sandburg's short poem "Fog" and an excerpt (stanza 3) from Eliot's long poem "The Love Song of J. Alfred Prufrock" - the poets use metonymy and also use the same image of a personified (or cat-ified) fog.
For our April prompt, we ask you to write a poem based on a central image that uses metonymy. If you wrote a poem about "cradle to grave" you would have a double metonymy. If you decide the central image needs to be a synecdoche - perhaps about your "lead foot" - that's also fine.
You might even want to consider building upon these poets' use of fog since it can also mean, figuratively, unable to think clearly as in "she was foggy with sleep" or indistinctly expressed, as in "Exactly what Eliot meant is still foggy."
Visit our website at poetsonline.org
Posted by Ken Ronkowitz on 4/06/2021

The Academy of American Poets celebrates the 25th anniversary of National Poetry Month.   Each April, the Academy offers activities, initia... 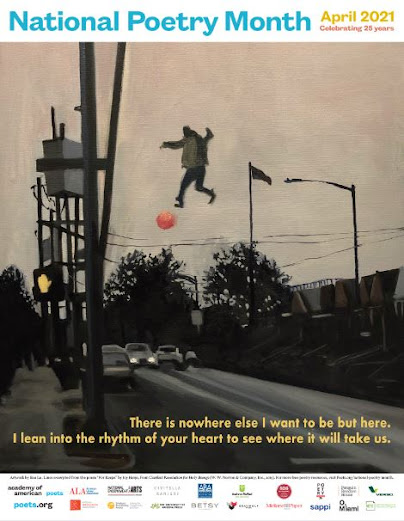