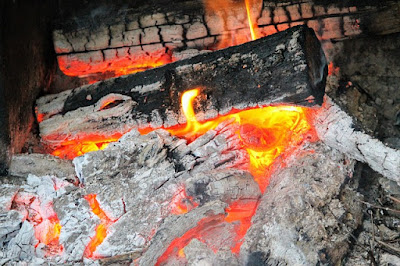 Before you read the rest of this post, listen to Robert Hayden read his poem "Those Winter Sundays."


Looking back on the poem on the page, "Those Winter Sundays" is a kind of sonnet of a Sunday morning ritual of making a fire to warm the house. It has been done so many times that the son probably never thought about it then. He is not alone in his inattention or in being with his father, but "no one ever thanked him."

Sundays too my father got up early
and put his clothes on in the blueblack cold,
then with cracked hands that ached
from labor in the weekday weather made
banked fires blaze. No one ever thanked him.

As the haiku poets know so well, the names of the seasons suggest many different things. Winter has been used symbolically to represent death, old age, hardship and endings. But writers have also used it in opposite ways - the pure, white snow s a blanket, a time of rest before renewal.

Hayden's winter is hard. His father works hard all week, but still has to get up early to warm the house before he wakes his son. It's a kind gesture, but the house also contains chronic angers that the warming fire can't dispel.

I’d wake and hear the cold splintering, breaking.
When the rooms were warm, he’d call,
and slowly I would rise and dress,
fearing the chronic angers of that house,

The days of the week have also taken on characteristics. Some are cliches by now - the drudgery of back to school and work Monday mornings, the freedom of Friday evenings, or the rest of a Saturday. To some a Sunday morning might suggest church, and to someone else it is a big breakfast or brunch. We made Wednesday into a Hump Day, a mid-week peak that we needed to get over.

Speaking indifferently to him,
who had driven out the cold
and polished my good shoes as well.
What did I know, what did I know
of love’s austere and lonely offices?


Those last two lines are my favorites. They are an unrhymed couplet to close the sonnet. They are the clincher, the lesson learned only years later.

This is a poem that is often anthologized and frequently taught. There is a guide to the poem online if you want a short lesson.

In these lazy days of summer, our July prompt is very simple. Begin with a title that must contain minimally a season and a day of the week.  Your title might be as plain as "Spring Saturday" or as detailed as "Waking at 3 a.m. on the Last Sunday of Summer."  Where your poem goes from there is yet to be known.