How dreary – to be – Somebody!
How public – like a Frog –
To tell one’s name – the livelong June –
To an admiring Bog!

Taking a few minutes to remember Emily Dickinson, born on this day in 1830 and Margaret Maher.

Emily wrote nearly 2,000 poems, but she only published about 10 of these in her lifetime.

Her maid, Margaret Maher, was the only person who knew about the full output of her writing. Emily would spend hours in the kitchen with Margaret, baking breads and cakes, and scribbling poems on chocolate wrappers and the backs of shopping lists. Maher was literate and she even dabbled in poetry herself now and then; the two women wrote poems back and forth to each other. Some scholars believe that Maher’s Irish syntax made it into some of Dickinson’s work. In any case, Dickinson trusted Maher with her poems — literally. She stored them in the trunk that Maher had brought over from Ireland.

Dickinson left strict instructions for Maher to burn her poems after she died, but when the time came, Margaret, thankfully, couldn’t bring herself to do it.

She brought the poems to Lavinia, Emily’s sister. Lavinia had already burned most of her sister’s letters, but she agreed with Maher that the poems should be published. 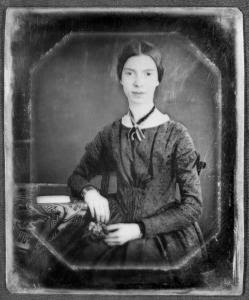 Maher also supplied the only daguerreotype that we have of Emily Dickinson.

The family didn’t like the picture, but Maher kept it, and gave it to the publisher to include with the first edition of Dickinson’s poems.

To make a prairie it takes a clover and one bee,
One clover, and a bee.
And revery.
The revery alone will do,
If bees are few.

You can read some of those poems at https://www.poets.org/poetsorg/poems/45673