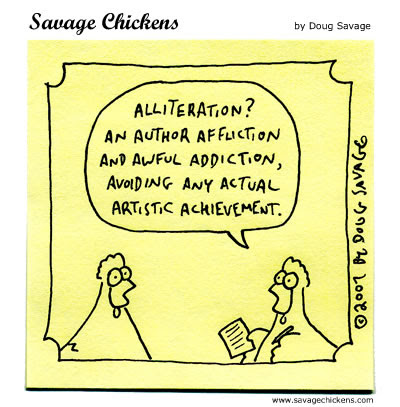 We all were taught literary terms in school, especially during some poetry unit. Simile, metaphor, personification and many others were supposed to be the common vocabulary and grammar we used to dissect the poems.

This month's model poem for our prompt is one that is titled with a literary term - alliteration. The poem itself is no ars poetica though.

I whacked off in these woods once.
But that was a long time ago when
everything rhymed a little with
the trees all facing upward and the sky
was full of itself and no one
was around. And everything smelled good.
I smelled good myself. A sweaty,
muddy, musky, burning smell of
autumn or late summer or very early
spring was in the air, and I was so
excited to be so young and existential
and solipsistic, that I peeled off my shirt
and pants and underpants, and stood there
erect and steeply rocking under a sycamore,
my peeled bark in a little pile at my feet,
my head tossing in the wind, my mouth
opening, wider, wider, as if trying
to pronounce all the vowels at the same time
and failing deliciously, and sinking down
to the ground, totally spent and spluttering
a few choice consonants like kisses meant
for the pursed lips of the wind.


We know that alliteration is the repetition of the initial sounds (usually consonants) of stressed syllables in neighboring words. Usually it occurs at word beginnings, as in this line from Shelley's "The Cloud":  I bear light shade for the leaves when laid.

The poem has alliteration, but do you see a connection from the term to the poem's subject?  Repetition? The "few choice consonants" of spluttered sound? How intentional was it in this somewhat naughty-boy poem that has several puns that another name for alliteration is head rhyme?

For our August prompt, select a literary term as your title and starting point. Besides the common terms, there are plenty of lesser known ones (like half rhyme). And a term like "meter" has many sub-topics to offer. Pentameter and caesura suggest things outside of poetry to me. What would a poem titled "Free Verse" or "Masculine Verse" or "Feminine Verse" address?

To avoid preconceived notions, perhaps you should just browse a list of literary terms for poetry and find one that gets your interest. 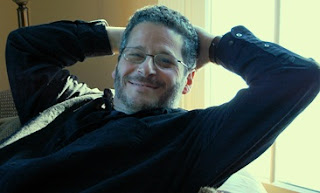 Paul Hostovsky is the author of four books of poetry, Hurt Into Beauty

(2012), A Little in Love a Lot (2011), Dear Truth (2009), and Bending the Notes (2008). His poems have won a Pushcart Prize, two Best of the Net awards, numerous chapbook contests, and have been featured on Poetry Daily, Verse Daily, and The Writer's Almanac. He works in Boston as a sign language interpreter at the Massachusetts Commission for the Deaf

"Alliteration" is from his forthcoming book Naming Names which can be pre-ordered now online.

Paul is online at www.paulhostovsky.com