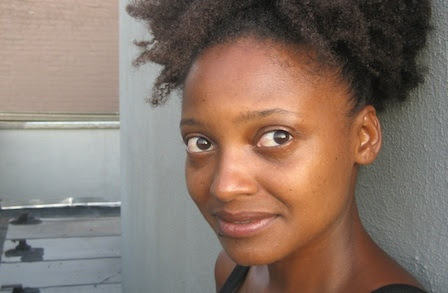 Tracy K. Smith is the author of three books of poetry. The Body's Question (2003) won the Cave Canem prize for the best first book by an African-American poet and  Duende (2007) was the winner of the James Laughlin Award and the Essence Literary Award.

Her newest book is Life on Mars which won the 2012 Pulizer Prize for Poetry. Smith teaches creative writing at Princeton University.

She says that she "wrote the bulk of the book in the wake of my father’s death, and while I was pregnant with my daughter. So those unknowns felt very present and very urgent for me. I needed to figure out where I believed my father had gone and what he had become a part of, and so approaching the page really became a matter of attempting to describe or create a version of that world that would allow me to move through my private grief to something else. But even beyond my own private experience, I think it’s quite natural to use versions of what we know or have experienced as the framework for imagining what we cannot know, and what we have not yet experienced. That’s why metaphor exists.

The title of Smith's collection comes from the David Bowie

One poem in the collection, "Don't You Wonder, Sometimes?," mentions Bowie directly.

Bowie is among us. Right here
In New York City. In a baseball cap
And expensive jeans. Ducking into
A deli. Flashing all those teeth
At the doorman on his way back up.
Or he’s hailing a taxi on Lafayette
As the sky clouds over at dusk.
He’s in no rush. Doesn’t feel
The way you’d think he feels.
Doesn’t strut or gloat. Tells jokes.

I’ve lived here all these years
And never seen him. Like not knowing
A comet from a shooting star.
But I’ll bet he burns bright,
Dragging a tail of white-hot matter
The way some of us track tissue
Back from the toilet stall. He’s got
The whole world under his foot,
And we are small alongside,
Though there are occasions

When a man his size can meet
Your eyes for just a blip of time
And send a thought like SHINE
SHINE SHINE SHINE SHINE
Straight to your mind. Bowie,
I want to believe you. Want to feel
Your will like the wind before rain.
The kind everything simply obeys,
Swept up in that hypnotic dance
As if something with the power to do so
Had looked its way and said:
Go ahead.


In an interview on Studio360, Smith admits to a fascination with Bowie's Ziggy Stardust because Bowie seemed to embody “the imagination as something that is capable of creating a whole new world and a whole new sense of self.” And the view back down at earth was equally as captivating: “I love the sense of looking at the sad, paltry, and yet very familiar spectacle that we must make from moment to moment in our lives, and in our frenzy, as something that’s as out there as alien life.”

The themes of space and distance was further fueled by Smith’s father who worked on the Hubble telescope. When he died in 2008, Smith tells Studio360 host Kurt Andersen

, she looked at the Hubble’s images of deep space with new curiosity. “I always felt there was this kernel of connectedness that he and I shared,” she says, “even though we veered in very separate directions.” Other poems in the collection consider his death, as well as black holes, metaphysics, and the afterlife."

Listen to the Studio360 interview
Posted by Ken Ronkowitz on Friday, June 01, 2012