Getting Nude With Jan Beatty 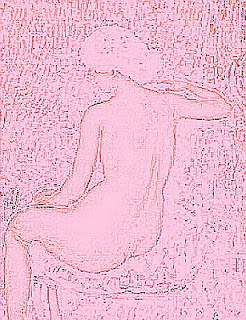 as part of our current writing prompt.

In the book, she says that red sugar is "the sweet, deep inside of the body." Some reviews of her poetry point out that her poems are often sexually explicit, gutsy, or revealing. I think those are labels that limit poets.

The poems in the book that got me thinking about this month's prompt included one about a six year old girl encountering a naked man in the woods and running away. ("It's the body inside me that's running, my red sugar body that shows me the brutal road to love.")

In most of the poems, it's the inside of the body, not the fleshy outside, that carries the poem.

In another poem, a waitress sees a woman she believes is her birth mother. ("When I saw her up close, I knew she was blood.")

Yes, there are poems that are more blatantly sexual - meeting Eros at a downtown peep show and poems about kinds of sexual acts - but I was looking more at poems about wanting "to be the red sugar of the pomegranate."

Read a few of her poems, like "I'll Write the Girl" or "Report from the Skinhouse"

I went looking for the body.

Muscled calf, the neptune green
eye, blood with the same
taste as mine.

Why do I write my report this way?
An adopted child needs to find a face.

What does a real mother's body look like?
River, chalkline, bloody cave?

and I think you'll probably agree.