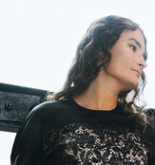 was born in 1963, in Moscow. She graduated from the Schnittke College of Music and the Gnessin Academy, where she specialized in history of music. She began writing poetry at the age of twenty, after the birth of her first daughter, and published her poems at the age of 24.

Her first collection, “Nebesnoye Zhivotnoye” (“The Heavenly Animal”), was published in 1997. Her fourth collection, “Chetvertyi Son” (“The Fourth Dream”), was acclaimed by the Russian Academy of Letters as the best book of the year and awarded the Apollon Grigoriev prize, the most prestigious of its kind in Russia.

Pavlova has published fourteen collections of poetry in Russian. If There is Something to Desire: One Hundred Poems

is her first full collection published in English.

The collection contains 100 poems, most less than ten lines.

Of course, with translations, we never know if the original form has been retained. Her poems are generally untitled or numbered. The model I used for this month's writing prompt is the title poem from that collection.

I thought we might try her form, but then I decided it might be too limiting. So, here's this month's variation for the prompt:

The subject is wide open for this abbreviated month's prompt, but write an 8 line poem that has your own created form. You might experiment with rhyme scheme, line breaks, repetition, syllables.

Deadline for submissions is July 5.

Here are two other poems from her newest collection:

Why is the word yes so brief?
It should be
the longest,
the hardest,
so that you could not decide in an instant to say it,
so that upon reflection you could stop
in the middle of saying it

I think it will be winter when he comes.
From the unbearable whiteness of the road
a dot will emerge, so black that eyes will blur,
and it will be approaching for a long, long time,
making his absence commensurate with his coming,
and for a long, long time it will remain a dot.
A speck of dust? A burning in the eye? And snow,
there will be nothing else but snow,
and for a long, long while there will be nothing,
and he will pull away the snowy curtain,
he will acquire size and three dimensions,
he will keep coming closer, closer ...
This is the limit, he cannot get closer. But he keeps approaching,
now too vast to measure ...

And this will certainly remind readers of haiku

Basked in the sun,
listened to birds,
licked off raindrops,
and only in flight
the leaf saw the tree
and grasped
what it had been.

Pavlova's poems were translated into English from Russian by her husband, Steven Seymour. When she was asked in an interview how she felt translation influenced her poems - what is lost, what is gained - she replied:

My meager English does not allow me to judge the subtle points of translations. As for my works in Russian, I am afraid they are becoming increasingly untranslatable, as I try to give more attention to form, an attempt to convey meanings not so much through words but through rhythm, melody, sound, and all of that is untranslatable, to my regret. A poem is a trinity of sorts: image, thought, and music, and the latter has the least chance of surviving translation.


If There is Something to Desire: One Hundred Poems

What an interesting poet. Thanks for introducing her to me (us). And thanks for continuing with these prompts. They are always a fun challenge!

You stated the form for the prompt poem is abbccdda,
but it looks to me as if it is: abbc cbba --the second stanza mirrors the first.

This is a great prompt, and as Violet said, thanks for introducing Pavlova to those of us who have never read her work.

It's all one stanza. Same opening and closing word/rhyme with three couplets between them. You're correct though, it should read abbccbba with "regret" repeating 4 times. (I will correct the post - thanks)

If anyone knows a name for this form, please post.

The name of the form is madrigal or madrigale; at least the form fits under that umbrella. Seems it dates back to the fourteenth century and is sometimes used for poetry that can be set to music.

Poems for the June prompt are not on the site. Not sure if you were aware.

They are there and have been receiving hits since last week at
http://poetsonline.org/archive/arch_form.html