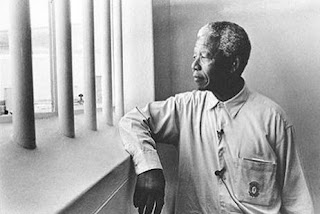 I'm happy for any attention that the media can bring to poetry. The new film, Invictus, gets its title from a poem that inspired Nelson Mandela.

"Invictus" is a poem by the English poet William Ernest Henley

. It was a poem that gave strength and courage to Mandela while he was incarcerated.

Henley, at the age of 12, was a victim of tuberculosis of the bone. The tuberculosis attacked his foot and caused his leg to be amputated below the knee. He was told by his physician that amputating the leg was the only way to save his life. While hospitalized, he wrote "Invictus." He lived nearly 30 years after his release from the hospital.

...It matters not how strait the gate,
How charged with punishments the scroll.
I am the master of my fate:
I am the captain of my soul.


Invictus: Nelson Mandela and the Game That Made a Nation by John Carlin