has received a MacArthur fellowship (the "genius grant" comes with a $500,000 honorarium). 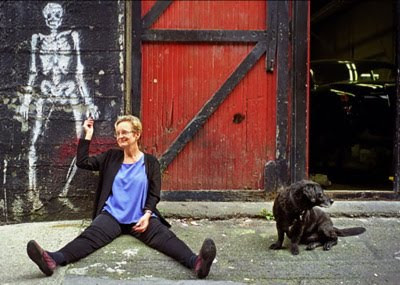 Her new book of poems, Upgraded to Serious, will be available in early October.

The book has been described as "fast-paced, verbally dexterous, sarcastic and brilliantly humorous." The book uses medical terminology and iconography to work through loss and detachment. The book's title is a references being “upgraded to serious” from critical condition in the context of the healing powers of poetry.

Take as examples the opening stanzas of three of the book's poems:

Not to Be Dwelled On

Self-interest cropped up even there,
the day I hoisted three instead
of the ceremonially called-for two
spadefuls of loam
onto the coffin of my friend.


No Sex for Priests

The horse in harness suffers.
He's not feeling up to snuff.

The feeler's sensate but the cook
pronounces lobsters tough.

Surfaces to scrape or wipe,
a screwdriver to be applied
to slime-encrusted soles, and then

there are the spattered hallways, wadded bedding —
and, in quantities astounding (in the corners,
under furniture, behind the curtains)

Heather McHugh was born to Canadian parents in San Diego, California, in 1948. She was raised in Virginia and educated at Harvard University. From 1999 to 2006 she served as a Chancellor of The Academy of American Poets, and in 2000 was elected a fellow of the American Academy of Arts and Sciences. For over 20 years, she has served as a visiting faculty member in the MFA Program for Writers at Warren Wilson College, and since 1984 as Milliman Writer-in-Residence at the University of Washington in Seattle.