How To Read Edward Hirsch and Fall in Love with Poetry 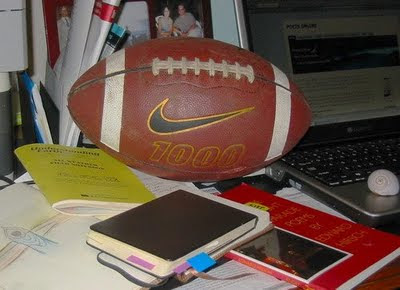 Edward Hirsch wrote the model poem for our August writing prompt, and he wrote the prose bestseller How to Read a Poem and Fall in Love with Poetry.

Might one fall in love with poetry by reading Hirsch? Why not. It only take one poem to turn someone on to poetry or a particular poet.

I have heard him read a number of times. I have also heard him talk about poetry at the Dodge Poetry Festivals and once in a workshop setting. He certainly is in love with poetry's physical and emotional powers. 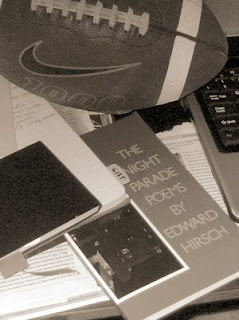 I got to speak to him during a coffee break at that workshop back in 2000 and told him that I had shown his poem "Execution" to my son. The poem is about Hirsch seeing his high school football coach, who had cancer, for the last time. The coach was someone who "believed in football like a new religion / And had perfect unquestioning faith in the fundamentals."

Friends of mine know that I think that almost every poem is about poetry, and this one feels like that to me.

I told him that one son suffered from the same problem as a football player that Hirsch had described of himself in introducing us to the poem. He thinks too much. He said his coach pounded a locker room trash can and told him to stop thinking and just react. My son's coach told him the same thing. His baseball coach evewrote on the inside of his cap's visor DON'T THINK, so that if his eyes went up he would be reminded. But it's a tough thing to do - to not think about it - for some people.

"Execution" closes with a memory of a game his senior year when:

When we met a downstate team who loved hitting
More than we did, who battered us all afternoon
With a vengeance, who destroyed us with timing
And power, with deadly, impersonal authority,
Machine-like fury, perfect execution.

Perhaps, I should have saved Hirsch for a sports prompt. In How to Read a Poem and Fall in Love with Poetry, one poem he works through is Emily Brontë's "Spellbound." He discovered that poem at age 8 when "baseball season was over for the year." For me, discovering a poem and then Poetry is the real point of that particular book.

Though it is not a book about writing poetry, but a book about reading it, if you follow my ars poetica generalization, it's all the same thing.

Why does this written doe bound through these written woods?
For a drink of written water from a spring
whose surface will xerox her soft muzzle?
Why does she lift her head; does she hear something?
Perched on four slim legs borrowed from the truth,
she pricks up her ears beneath my fingertips.

Hirsch's own advice in reading the poems he selects in the book is:

Read these poems to yourself in the middle of the night. Turn on a single lamp and read them while you're alone in an otherwise dark room or while someone else sleeps next to you. Read them when you're wide awake in the early morning, fully alert. Say them over to yourself in a place where silence reigns and the din of the culture--the constant buzzing noise that surrounds us--has momentarily stopped. These poems have come from a great distance to find you. I think of Malebranche's maxim, "Attentiveness is the natural prayer of the soul." This maxim, beloved by Simone Weil and Paul Celan, quoted by Walter Benjamin in his magisterial essay on Kafka, can stand as a writer's credo. It also serves for readers. Paul Celan wrote:

A poem, as a manifestation of language and thus essentially dialogue, can be a message in a bottle, sent out in the--not always greatly hopeful--belief that somewhere and sometime it could wash up on land, on heartland perhaps. Poems in this sense are under way: they are making toward something.

(Read Hirsch's own poem, "In Memoriam Paul Celan")
And now, our prompt...

Usually it is the turning into the new year that makes us think about making resolutions. Eat healthier, exercise more, learn a musical instrument, stop smoking, get better about sunmitting poems...

It might be near the new year in Hirsch's poem "I'm Going to Start Living Like a Mystic," but it seems like it's just a walk in the park one evening that suddenly causes a person to resolve to change their life - and in no small way - to live like a mystic.

I think poets often can take a creative distance and use it to make the leap that allows trees to be prophets on a pilgrimage, shows pigeons to be students of winter and might send us to seek wisdom in a pond.

What does it take to change your life? Not always a big thing, not a tragedy or a revelation.

What does it take to change your mind about poetry or a poet? One poem? One line?

For this month, try writing a poem that starts off with a resolution to change your life and take us through the inspiration and the process.

Edward Hirsch reading "A Partial History of My Stupidity" and " The Widening Sky."
Hirsch also has published Poet's Choice

which collects two years' worth of his weekly essay-letters on poems and poetry that originally appeared in the Washington Post Book World.

The poem "Execution" is from The Night Parade