Paterson: The Falls and The Poem 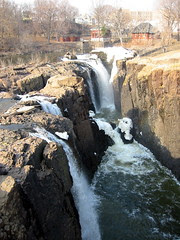 Great Falls of the Passaic Riverby Ronkowitz
When the Senate approved legislation to designate the Great Falls in Paterson, New Jersey a National Historic Park last month, it inspired me to take Paterson

, a poem by William Carlos Williams, off the shelf again.

Williams' epic poem is actually five books (and a fragment of a sixth book) that were published separately and then collected as one book in 1963.

Williams was not a fan of Ezra Pound's and T. S. Eliot's allusions (to other languages and classical works) as I was when I was in high school. So, I came to Williams (from my home state of NJ; He was born in Rutherford) later in my education. Like many of his fans, I now find his use of "the local" a substantial part of his appeal.

Williams wrote in an earlier (1927) poem titled "Patterson" that there were "No ideas but in things" which is an often quoted description of his poetic method.

—Say it, no ideas but in things—
nothing but the blank faces of the houses
and cylindrical trees
bent, forked by preconception and accident—
split, furrowed, creased, mottled, stained—
secret—into the body of the light!

Dr. Williams, M.D., who maintained a medical practice in nearby Rutherford, acted as a kind of poetic reporter giving readers "the news" in poetry. For the writing of Paterson, he says:

I started to make trips to the area. I walked around the streets; I went on Sundays in summer when the people were using the park, and I listened to their conversation as much as I could. I saw whatever they did, and made it part of the poem.

That is clear in many of his poems, such as

The Young Housewife
At ten A.M. the young housewife
moves about in negligee behind
the wooden walls of her husband's house.
I pass solitary in my car.
Then again she comes to the curb
to call the ice-man, fish-man, and stands
shy, uncorseted, tucking in
stray ends of hair, and I compare her
to a fallen leaf.
The noiseless wheels of my car
rush with a crackling sound over
dried leaves as I bow and pass smiling.