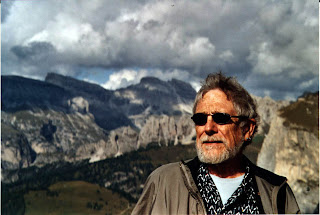 Gary Snyder has won the 2008 Ruth Lilly Prize for his body of work.

The Lilly Prize, with a stipend of $100,000, is one of the most lucrative prizes in American letters. Snyder is considered a Northwest poet because of his nature-centered verse, even though he has long lived in Northern California.

The 77-year-old poet, a follower of Zen Buddhism, lived on a farm in what was then the rural area of Lake City, Washington until the age of 13. Spending the summer of 1952 as a fire lookout in the North Cascades also had a huge impact on Snyder's writing.

Hay for the Horses


He had driven half the night
From far down San Joaquin
Through Mariposa, up the
Dangerous Mountain roads,
And pulled in at eight a.m.
With his big truckload of hay
behind the barn.
With winch and ropes and hooks
We stacked the bales up clean
To splintery redwood rafters
High in the dark, flecks of alfalfa
Whirling through shingle-cracks of light,
Itch of haydust in the
sweaty shirt and shoes.
At lunchtime under Black oak
Out in the hot corral,
---The old mare nosing lunchpails,
Grasshoppers crackling in the weeds---
"I'm sixty-eight" he said,
"I first bucked hay when I was seventeen.
I thought, that day I started,
I sure would hate to do this all my life.
And dammit, that's just what
I've gone and done."