The Romance of That Little Notebook in the Cafe

Moleskine. There is something about using that little black notebook and knowing all the writers and artists who have used it before you - Hemingway, Picasso, Van Gogh (that's one of his over there on the right), Bruce Chatwin, Matisse, Neil Gaiman...

You see it in films. Isn't that Amelie holding one? And even Prot (and he's from K-PAX - the other planet I want to visit) has one.

Sometimes it's used as a generic term for little soft black notebooks, the real Moleskine (pronounced mol-a-skeen-a) is a brand of notebook now manufactured by Modo & Modo, an Italian company.

Bound in oilcloth-covered cardboard (the "Moleskin"), it has an elastic band to hold the notebook closed and a sewn spine so that it lies flat when opened. It comes in several sizes, with lined or unlined papers.

Bruce Chatwin used them in his travels and in the mid-1980's his Paris source ran out, he discovered that they were no longer being made by the original manufacturer. They are back though and made in the same shapes and styles.

I'm a sucker for notebooks and journals. I always felt an optimism for the new school year with that fresh notebook in hand. Give me a moleskine and put me in a street cafe or bar (even a Panera or Starbucks will do it) and I feel some ex-pat writer being channeled through me. Now, I'm not saying that it creates great writing, but it creates mood. 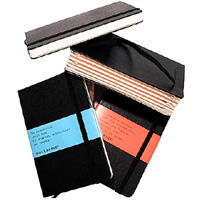 As readers of this blog already know, I have small books for small poems but I have a number of these notebooks from their catalog for different purposes.

If you have never owned one, drop by a little bookstore or Amazon and buy one and give it a try.
Posted by Poets Online on Sunday, July 23, 2006