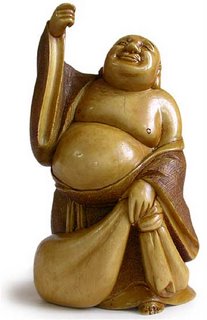 He is called Hotei, "The Cloth Sack Buddha" in Japan. The Happy Buddha, or Laughing Buddha is probably the most popular of the Seven Gods of Good Fortune. He is worshipped as the God of happiness and contentment, and also looked upon as the Protector of Children. Hotei was thought to be a 10th Century Chinese monk, an eccentric wanderer with a large belly and an empty sack. It's note worthy that his large belly isn't from a result of excessive eating, but rather an indication of his life force, which in Chinese is known as Qi (chi). In addition, his empty sack is actually a treasure bag. Hotei is believed to dispense riches to the poor and needy at will.

This month we are looking at Wendell Berry's poem "The Wild Geese" which I was surprised to find online as part of a number of web pages about sermons. I guess I shouldn't be surprised since the poem has a strong spiritual (if not religious) tone to it.

I linked to one one sermon that quotes the lines "And we pray, not for new earth or heaven, but to be quiet in heart, and in eye, clear. What we need is here.” The sermon compares that to Jesus recognizing that faith might stumble as devotion and love hit the realities of life. When people are distracted from their religious beliefs they may turn to "others gods, to traditions with greater or lesser demands, and to the fads and fancies of culture and times. " Is this sermon saying that the weak turn to things like Hotei, Zen, meditation and others? Is it saying that this is a bad thing? That's how I read it. I think what we need is here, but I don't believe there is one way to find what we need.

Another sermon (delivered the week after Thanksgiving) looks more at contentment and at being at peace with what we have - which is not the same thing as having what we need available here and now.

I mentioned a "Biblical filter" that you could use to read the poem but I probably shouldn't have used "Bible" if that means that readers would limit their explorations to certain religions or philosophies. In fact, what I really think of when I hear the word contentment is meditation. Whether I think of Thomas Merton or Thich Nhat Hanh is not really the important part.

"The Wild Geese" is anthologized in a number of books, though I would highly recommend Wendell Berry's Collected Poems and his collection A Timbered Choir; the Sabbath Poems.