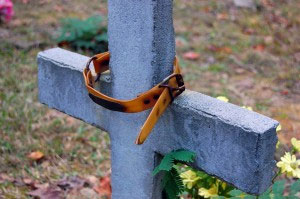 This month we considered the poem "Dog's Death" from John Updike's Collected Poems 1953-1993 (Knopf) as the model but I didn't originally mean to have everyone submit poems about dogs or other pets or even exclusively poems about death.

I mentioned on the site that it's not a sentimental poem. I wouldn't give it to a friend on the occasion of their pet's death as consolation. It's not about a funny and wise pet like Mark Doty's "Golden Retrievals".

It's certainly about death, loss, showing a kind of dignity in facing death, the death of the young, this desire many of us seem to have (thank goodness) to do the "right thing".

I personally look at it as a poem about the inability of even love to triumph over death - "Though surrounded by love that would have upheld her / Nevertheless she sank".

Updike wrote a second poem about this topic called "Another Dog’s Death" (also in his Collected Poems) which begins like this:

For days the good old bitch had been dying, her back
pinched down to the spine and arched to ease the pain,
her kidneys dry, her muzzle white. At last
I took a shovel into the woods and dug her grave

in preparation for the certain. She came along,
which I had not expected..."

You can read the entire poem at this National Public Radio site which is part of a series called "The End of Life: Exploring Death in America" that they did. There are other readings there which I think you will find interesting, not only for this prompt but for yourself.

About Updike - Ernest Hilbert in a review of Updike's Americana: and other poems says:

"John Updike balances upon, and in many ways defines, the center of the beam in American literature. While maintaining a highly literary elan and readership, he has managed to avoid the obscurity and ostentation associated with "highbrow" authors...

As a poet, Updike is thought of primarily as a practitioner of Light Verse, a term bestowed as often to insult as to categorize a poet, catching up in its loose netting a variety of brightly-colored fish: verse de société, parody, epitaph, clerihew, occasional verse, anything unconcerned with love, beauty, death, formal experimentalism, the stuff (or stuffing as is often the case) of serious poetry (even the designation "verse" is meant to be a bit contemptuous, the yield of poetaster rather than poet). Wit, cleverness, and breezy elegance define the genre, and in these métiers Updike is gifted, to be sure, but he has never been limited to such.

Amid his Nashian poems of the past four decades, there were innumerable moments of incredible grace and depth. For instance, his poem 'Dog's Death', though rarely anthologized, is recognized as that unusual thing, a genuinely sad poem. It brinks at every turn the slope of sentimentality that drops down into the chasm of maudlin corniness, but it manages to hold its footing... It is perhaps one of the rare times that a reader might apply the description "sentimental" without intending harm to poem or poet. "

I like Updike's lighter verse too. Here's a small sample:

The window screen
is trying to do
its crossword puzzle
but appears to know
only vertical words.

which reminds me of something that Richard Brautigan might have written.

So, this month's prompt is asking for you to put form to any of the themes mentioned above, and to follow its rather wide road without driving into the dark woods you are passing through.
at January 29, 2006 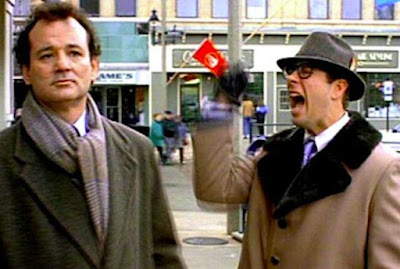