Everyone seems concerned with losing weight, watching calories and avoiding heavy foods these days. It seems natural that we might want our verse a bit lighter too.

Writers Almanac for a poem to start the day. He has also edited several anthologies of his favorite poems, but he has also published O, What a Luxury: Verses Lyrical, Vulgar, Pathetic and Profound. 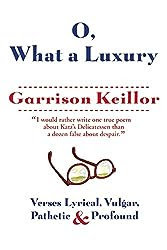 The title says it pretty succinctly. Some light verse is lyrical, some vulgar, some pathetic.

Keillor says that when he was in high school an English teacher tried to interest him in "Mr. Frost's guy who stopped in the woods to see snow fall and Mr. Eliot's guy who was not sure whether he should eat a peach" but that didn't work. It was "like serving bran flakes to someone who'd eaten buttermilk pancakes slathered with maple syrup."

Maybe you have read Lewis Carroll, Edward Lear or Ogden Nash or even W.S. Gilbert or, as Keillor has it "the great Anon." Light verse may be an acquired taste, but no one seems to consider it gourmet dining. It's more like acquiring a taste for cotton candy.

There are many notable poets in this genre and many "regular" poets who dabbled in light verse. Even serious Mr. Eliot wrote that book of cat poems that went on to be a long-running Broadway play.

Old Possum's Book of Practical Cats ("Old Possum" was Ezra Pound's nickname for him) was Tom's shot at light verse. After Eliot's death, the book was adapted as the basis of the musical Cats by Andrew Lloyd Webber.

Here is one of Garrison Keillor's poems that I like in this genre:

The seventeen-year cicada crawls out of the ground
And looks around from a wall or a low-hanging limb—
He looks for her and she discovers him.
Courtship does not extend for months.
Their only job is to have sex once.
No long interlude of pleasant reminiscing about days gone by.
Just buzz and whir and thank you sir and then you die.
Cicada love does not involve poetry or song.
Was it good for you? Thanks. So long.

What is this light poetry, or light verse? I would say that it attempts to be humorous (not the same thing as "funny" as anyone who has ever read an anthology of humor). They are usually brief. They can be on a frivolous or serious subject. You'll want to feature some word play, including puns, adventurous rhyme and alliteration.

There are plenty of anthologies of light verse and the journal Light is a source of new poems. I was delighted to see that one of my online friends, Toby Speed, has the "Poem of the Week" on their site. Hers is a good, terse example of all the "rules" I listed above. Of course, poets of light verse laugh and make puns from rules.

How to Use a Lemon

Squeeze some into tea.
Frizzle off the zest.
Add it to piccata
and pith away the rest.


This prompt is open to submissions until the deadline: October 18, 2015