Looking through A Poet's Glossary,

Hirsch has put together a very international collection of terms from A (as in abededarian) to Z (zeugma).

You might try writing a Bedouin women’s ghinnawa (highly stylized verses) or a style of gentle banter that originated as a sung verbal duel in the West Indies called picong.

There are also the more familiar terms that we were introduced to in school.

The book has been called a followup to Edward Hirsch’s best-selling book How to Read a Poem: And Fall in Love with Poetry from 1999 which contained a useful but limited  glossary.

For example, Hirsch defines "couplet" as two successive lines of poetry, usually rhymed (aa), which has been an elemental stanzaic unit—a couple, a pairing—as long as there has been written rhyming poetry in English.

We call a couplet closed when the sense and syntax come to a conclusion or strong pause at the end of the second line, thus giving a feeling of self-containment and enclosure, as in the first lines of “To His Coy Mistress”:

Had we but world enough, and time,
This coyness, Lady, were no crime.

We call a couplet open when the sense carries forward past the second line into the next line or lines, as in the beginning of Keats’s Endymion (1818):

A thing of beauty is a joy for ever:
Its loveliness increases; it will never
Pass into nothingness, but still will keep
A bower quiet for us, and a sleep

Ben Jonson told William Drummond that he deemed couplets “the brav­est Sort of Verses, especially when they are broken.” All two-line stanzas in English carry the vestigial memory of closed or open couplets.

In an interview, Hirsch explained his intent for the glossary:

I see this as a book for the initiated as well as for the uninitiated reader. People who don’t know much about poetry can find what they need to know about certain basics, like the nature of the line or the stanza, or the characteristics of a form, like the ghazal or the sestina. But there are also a lot of things in this book that even widely read readers of poetry may not know much about because they are outside our tradition. So, for example, you might not know to look up a form of African praise poem called the oríkì. If you care to think about praise poetry—what it is, how it functions—then the oríkì has a lot to tell you. To help the reader along different pathways, I’ve added “See also” at the bottom of every entry.


Curious about the abecedarian and zeugma? 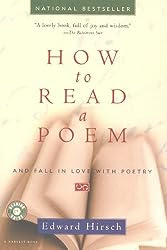