Prompt: Torn from the Headlines 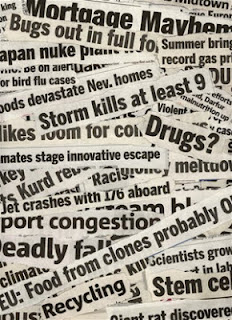 Newspaper headlines writers often have a flair for puns and other wordplay. Jay Leno made a regular crowd-sourced segment on The Tonight Show from reading headlines and ads that were sent in by viewers.

Sometimes it's intentional, as in a story about creating unique holiday sweatsuits called "Fleece Navidad." Sometimes the writers are having fun with innuendo as in "Summit ski area gets first decent dump." Sometimes you wonder what they were thinking, or if they were thinking: "Home sales up, despite fewer homes sold" and "Abe Lincoln played key role in 'Lincoln.'"

But headlines as poem titles can serve the same purposes as most titles for poems; they offer a way into a poem and they can offer more than one way to view the poem.

Headline poems are frequently quite serious. They use an actual headline as the title. The poem may address directly the topic of the headline, or it may offer another perspective where the headline seems more ironic.

This month, for the first time, I am using one of my own poems as a model for a prompt. This is a poem that did come from an actual newspaper headline, but the story I chose to tell did not appear in the article. I was more taken in my thoughts with trying to put myself into the event that no one witnessed that occurred in a wooded area I knew as a place that deer often emerged from onto the road in front of my car.

She ran through the woods
to escape him.
He followed the path
knowing he would reach
the same place.

She wore stockings.
The thorns tore at them
and she bled.

When she came out,
her breath was visible
and he could smell her.

Like a deer, she stilled,
hoping he could not see her.
But he could.


Another example of a headline poem is one in the current issue of Crazyhorse by Amaud Jamaul Johnson titled “L.A. Police Chief Daryl Gates Dead at 83."

One of your two prompt options for June is to write a headline poem. Use the headline as your title. Grab a newspaper or click over to a newspaper site and start reading.

This month, since we have two possible prompts for your June writing, you may choose either or both and submit one or two poems. As a new submission requirement, we ask that you include in your email submission subject line both the word "submission" (which sorts it automatically to the proper mail folder) AND also the short title of the prompt - this month it will be "traveling" or "headlines." We always get poems submitted that don't have the correct subject line and also don't have anything to do with the current prompt, so perhaps this will help with the sorting process.