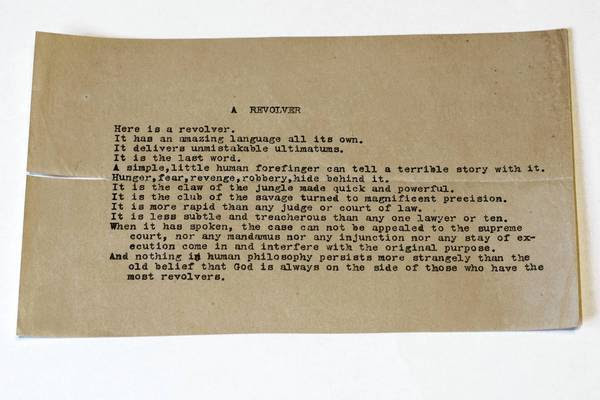 A previously unknown poem by Carl Sandburg has been by a volunteer working at the University of Illinois at Urbana-Champaign. The typewritten poem is titled "A Revolver."

Its discovery comes at a time when guns and violence are very much in the news in America following the Newtown school shootings and new legislation proposed by the Obama administration.

Here is a revolver.
It has an amazing language all its own.
It delivers unmistakable ultimatums.
It is the last word.
A simple, little human forefinger can tell a terrible story with it.
Hunger, fear, revenge, robbery hide behind it.
It is the claw of the jungle made quick and powerful.
It is the club of the savage turned to magnificent precision.
It is more rapid than any judge or court of law.
It is less subtle and treacherous than any one lawyer or ten.
When it has spoken, the case can not be appealed to the supreme court, nor any mandamus nor any injunction nor any stay of execution in and interfere with the original purpose.
And nothing in human philosophy persists more strangely than the old belief that God is always on the side of those who have the most revolvers.


Many of Sandburg's undocumented poems and drafts are in the University library collection and were donated about a year ago by Sandburg's wife and daughter.

Carl Sandburg, who died in 1967, was a Illinois native. He received Pulitzer Prizes for poetry in 1919 and 1951. He received another Pulitzer in 1940 for his biography of Abraham Lincoln, a historic figure that he admired very much.

A University of Illinois English professor emeritus, George Hendrick, who has edited collections of Sandburg's poems, said the poem appears to be from the writer's later work. He speculated that the poem might be related to Lincoln's assassination.

This "discovery" sounds more like someone trying to imitate Sandburg than a genuine article. Sandburg was specific in his details and used small things to make a point. This fake has too many vague phrases and favors sophisticated vocabulary over simplicity.

Ernie Gullerud, the supposed discoverer, said, "Golly, someone could have written this today." Indeed. I suspect that he did.