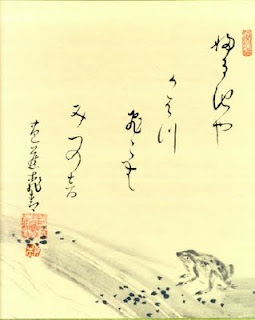 Our July prompt uses the tanka poetry form which is the "grandmother" of the newer haiku form. Here is a bit of haiku information that may add to your understanding of the tanka form.

consists of three unrhymed lines of five, seven, and five syllables. The tone of these poems are derived from a combination of this syllabic structure, imagery, and choice of words.

It reflects the values of Japanese culture and the strong influence of Zen Buddhism, especially in the way that haiku emphasizes a single moment. Most haiku give a very brief description of some event or object belonging to nature. In the traditional form, they contain either a direct or indirect reference to a season that turns the reader's attention to the passage of time.

Haiku came from the tanka form which itself was part of a longer renga. Renga (RAY'N-GAH) is "linked elegance" - a Japanese poetry form in which three-line stanzas of 5-7-5 are linked by a two-lines of 7-7 and were usually written by two or more persons. Poets such as Matsuo Basho

developed the 3 lines as its own accepted form.

Traditional haiku also contains kigo (KEY-GO) - a seasonal word. Rather than say "spring", the mention of a cherry blossom signals the season, for example.

Japanese does not have syllables, so our Western haiku in 5-7-5 syllables is an approximation of the way on (OH'N), or sound units, are used in Japanese. Each sound in a word is an on. For example, the word "Tokyo" has three on: to- k - yo. These are similar to syllables in English.

Our syllable is an uninterrupted sound. The word "jump" contains two morae in Japanese as does "haiku". But in English language, those two words are not equal in syllables.

The Japanese mora is what we might call a short syllable and the shortest linguistic measure. A long syllable is two morae (the plural of mora).  The word "jump" contains two morae (j-ump) and the word "haiku" contains three (ha-i-ku).


The Haiku Handbook -25th Anniversary Edition: How to Write, Teach, and Appreciate Haiku