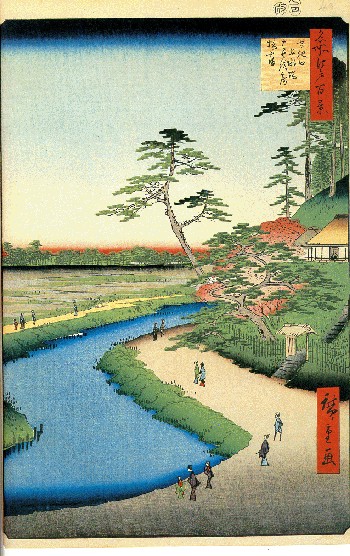 I seem to be caught up lately in the world of Japanese poetry. In some of my searching I came across this woodblock print by Ando Hiroshige

(1797-1858), entitled "Bashō's Hermitage and Camellia Hill on the Kanda Aqueduct at Sekiguchi."

is considered to be the original haiku master.

If you were to visit those rice fields on the left bank of the print today, you would be at Waseda University. ("Waseda" means "early rice field"). On the right side of the waterway is "Bashōen," or "Bashō's Garden," so named because Matsuo Bashō

There ia pond in the garden that local legend has as the inspiration for one of Bashō's most famous haiku which is engraved on a stone next to the pond in Bashō's calligraphy.

The old pond
A frog leaps in
The sound of water.

﻿ ﻿ In Henry D. Smith's edition of One Hundred Famous Views of Edo

, he describes the garden side of the print this way:


On the hillside to the right in this view was located Suijinsha, a shrine to the water god, protector of the Kanda Aqueduct, just as Suijin Shrine protected the Sumida. The shrine is located in the thick grove of trees seen to the far upper right, although the shrine building itself is not visible. Below, midway up the slope, is the Ryugean, a detached hermitage of a nearby Buddhist temple. The Ryugean was known for its beautiful natural setting, which looked out over the view we see here, with rice fields below a wooded rise, now the location of Waseda (“early rice-fields”) University, in the distance. The slopes surrounding the hermitage were covered with camellias, although Hiroshige here shows us only cherry blossoms. From this came the name "Camellia Hill," which survives in the name of the large banquet restaurant Chinzanso that occupies the site today.

Sometime in the late Edo period, as seen Hiroshige's title, the Ryugean came to be known as “Basho's Hermitage,” after the famous haiku poet who is said to have briefly lived in this area (but doubtfully in Ryugean itself) in the 1670s while in the service of a daimyo who had been charged with repairing the Kanda Aqueduct. In the early eighteenth century, some disciples of Basho set up a memorial mound to the poet within the precincts of Ryugean, apparently higher on the hill to the right of the view here, and some time later the Basho Hall (Bashodo containing images of the poet and his major followers was built nearby. The memorial mound and the Basho Hall survive today, although closed to the public, just outside the south corner of the Chinzanso gardens. Recently, a pleasant cherry-lined walk has been constructed along the bank we see to the right here, restoring some of the tranquillity of Hiroshige’s vision.

The Sixty-Nine Stations of the Kisokaido

Email ThisBlogThis!Share to TwitterShare to FacebookShare to Pinterest
Tags: Basho