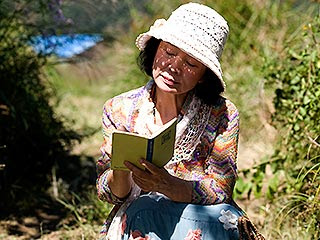 Poetry is a character study of a film (available on DVD

) that examines many of the same big topics that poetry on paper has always addressed - like beauty, truth and mortality.

In the film, Mija is attempting to live life fully. Part of that attempt is focused on trying to write one good poem.

Her teacher tells her that her difficultly is not writing the poem but finding the heart to write it.

As with many foreign films for Americans, the pace of the film will comparatively slow, but, then again, that's part of the film's story.

Email ThisBlogThis!Share to TwitterShare to FacebookShare to Pinterest
Tags: film

Where can I find it??