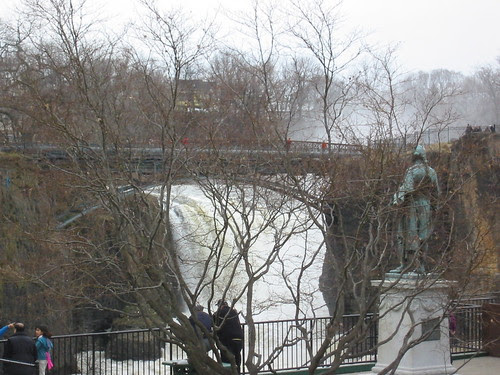 Great Falls, Paterson, originally uploaded by ronk53.
The Great Falls were booming this past week after heavy rain.

In 1778, they inspired Alexander Hamilton

They are also the falls that appear in William Carlos Williams

"Paterson lies in the valley under the Passaic Falls
its spent waters forming the outline of his back. He
lies on his right side, head near the thunder
of the waters filling his dreams! Eternally asleep,
his dreams walk about the city where he persists
incognito. Butterflies settle on his stone ear.
Immortal he neither moves nor rouses and is seldom
seen, though he breathes and the subtleties of his machinations
drawing their substance from the noise of the pouring river
animate a thousand automations. Who because they
neither know their sources nor the sills of their
disappointments walk outside their bodies aimlessly
for the most part,
locked and forgot in their desires-unroused.