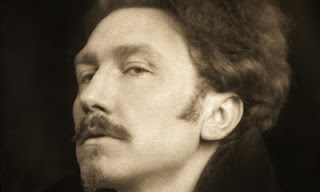 is generally considered the poet most responsible for defining and promoting a modernist aesthetic in poetry, his views and politics were controversial during his lifetime and still now, 28 years after his death.

In the early days of the 20th century, he created an exchange of ideas between British and American writers. He helped promote the writing and influenced contemporaries such as W. B. Yeats, Robert Frost, William Carlos Williams, Marianne Moore, H. D., James Joyce, Ernest Hemingway, and T. S. Eliot.

In his dedication for his poem "The Waste Land

Pound promoted Imagism, a movement in poetry that was heavily influenced by classical Chinese and Japanese poetry.

Imagism stressed clarity, precision, and economy of language. It did not encourage the use of traditional rhyme and meter.

The Imagists rejected the styles of much Romantic and Victorian poetry exemplified by Longfellow and Tennyson who were popular at the time.

Imagism's focus on "the thing" as thing" was the attempt at isolating a single image to reveal its essence. This idea was also popular in avant-garde art at the time, especially Cubism.

In Poetry magazine, Pound described "A Few Don'ts by an Imagiste" and an essay entitled "Imagisme" that gave this advice:

The first poem by him I encountered as a student is the often-anthologized, haiku-like


In a Station of the Metro

The apparition of these faces in the crowd;
Petals on a wet, black bough.

I liked that short poem, but I couldn't say very much about it. (Read what Mark Doty said about the poem in a workshop.)

It was much later that I later encountered his poem "Taking Leave of a Friend" which I used this month as a model for our writing prompt.

A contemporary poet, William Carlos Williams received his M.D. from the University of Pennsylvania, where he met and befriended Ezra Pound.

Pound became a great influence in Williams' writing. In 1913, Pound arranged for the London publication of Williams's second collection, The Tempers.


so much depends
upon

beside the white
chickens.

and his poem "This Is Just To Say."


I have eaten
the plums
that were in
the icebox

and which
you were probably
saving
for breakfast

Forgive me
they were delicious
so sweet
and so cold

Our writing prompt for July is a poem in Pound's imagiste style. By that I mean a poem that is (probably) short, stripped of excessive language, directly treating a "thing" (subjective or objective), without traditional rhyme or meter but perhaps with rhythm (as in a musical phrase), and focuses on one single image.

you will find that he departed from Imagism in his own poetry later, as in The Cantos which occupied his literary attention in the last part of his life.

A Companion to The Cantos of Ezra Pound