), about the imagined burning of the horse of Saint Joan of Arc (Jeanne d'Arc) is a painful poem. Read it this month on our prompt page.

I heard her read it years ago and it still haunts me. She uses Joan's horse as a way to explore not only the cruelty and tyranny of Joan's death, but also her own abusive childhood and the treatment of her mother. And, of course, it reaches beyond all that to ourselves.

I think the idea of using someone famous that we know, but describing them through an animal they loved is an interesting idea for a writing prompt.

There are some famous pets of the famous. Margate, a stray black kitten, who showed up on the doorstep of No. 10 Downing St. where Winston Churchill was heading out for a speech to be given in the town of Margate, was seen by him as a good luck sign and a show of support. Churchill adopted the kitten after giving the successful speech and named her Margate, and she ended up sleeping in Churchil's bedroom thereafter. General Robert E. Lee's horse that carried him through the Civil War was Traveller. I'm sure Traveller could tell a story of that bloody war.

But, I think McCarriston's poem may be intimidating as a model.

As serious as McCarriston's poem is, the result of using this prompt does not have to be all that serious.

TV cowboy Roy Roger's horse, Trigger, who was stuffed and placed in Rogers' home after he died, could not generate the same kind of poem.

Perhaps, you should think of the famous person and imagine the animal companion. 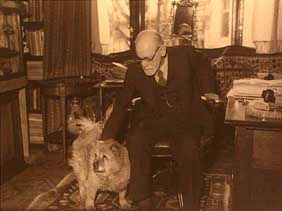 I searched famous pets a bit and found out that Sigmund Freud was known to include his dog as an assistant in his psychoanalysis.

He believed that dogs had a special sense that allows them to judge a person's character accurately. His favorite Chow-Chow, Jo-Fi, attended all of his therapy sessions and he thought the dog could alert him to any stress or tension in a patient. (He lay relatively close to calm patients, but would stay across the room if the patient was tense, and would unfailingly move toward the office door when the hour was up, according to What Do Dogs Know?

and Janet Walker.) You could give Freud an imagined schnauzer (I'll call him Moustache) as a point of entry into a poem about the man or about psychoanlaysis.

Consider Alexander the Great's cat, or Hamlet's falcon or any famous person's animal companion to start you writing.