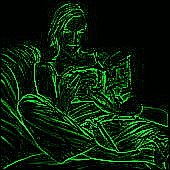 Poems about reading a specific book? I first thought of the Keats sonnet which I know was in my high school Brit Lit anthology.

On First Looking into Chapman's Homer

Much have I traveled in the realms of gold
And many goodly states and kingdoms seen;
Round many western islands have I been
Which bards in fealty to Apollo hold.
Oft of one wide expanse had I been told
That deep-browed Homer ruled as his demesne;
Yet never did I breathe its pure serene
Till I heard Chapman speak out loud and bold:
Then I felt like some watcher of the skies
When a new planet swims into his ken;
Or like stout Cortez when with eagle eyes
He stared at the Pacific—and all his men
Looked at each other with a wild surmise—
Silent, upon a peak in Darien.

The poem I offered as a model on the site though was Tony Hoagland's poem "Reading Moby Dick at 30,000 Feet." It's a much more accessible poem for modern readers than Keats. Even if you never read Melville's Moby Dick, almost everyone has a sense of the plot, so the allusion is not lost. (Want some help with the Keat's poem? Try this page)

The prompt was to write a poem that centers on a specific experience of reading. The poem shouldn't be aout the act of reading in general, but focus on the connections between the book's content and the setting, characters and action around the reader.

There are some obvious comaparisons for Hoagland between Melville's ship of the sea and the airship, but his compariosons are far less obvious.

What about how he questions the sailors' quest

where men throw harpoons at something
much bigger and probably
better than themselves,

wanting to kill it,
wanting to see great clouds of blood erupt
to prove that they exist.

and then he wishes he were one of them.

Better to be on board the Pequod,
with a mad one-legged captain
living for revenge.

Better to feel the salt wind
spitting in your face,
to hold your sharpened weapon high,

to see the glisten
of the beast beneath the waves.

For another take on this poetry about reading, look at the very different "After Reading Tu Fu, I Go Outside to the Dwarf Orchard" by Charles Wright.
Posted by Poets Online on 9/16/2006