Writing in the Margins 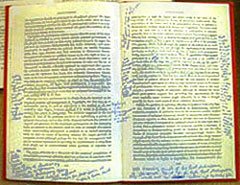 Does marginalia seem marginal as a prompt? It certainly seems small as a starting place (not a bad thing) and sometimes those notes, doodles and editorial comments in the margin of a book are only personal reminders (let's skip over the ones you did in college to study for the exam).

It does get some serious study though - as in the Melville's Marginalia site that I referenced (the notes Melville made in his library of books in an attempt to uncover sources of his own writing) or that Fermat's last theorem was written in a margin. Have you ever actually starting to write a poem in the margin?

Read or listen to Billy Collins' "Marginalia" if you haven't already.

Like Collins, I wondered what we might be able to guess about the marginalia writer from their notes-

A few greasy looking smears
and next to them, written in soft pencil-
by a beautiful girl, I could tell,
whom I would never meet-
"Pardon the egg salad stains, but I'm in love."

Let's look at the assumptions: it's a girl; she's beautiful; the pencil was soft; he'll never meet her. And what about the assumptive leaps Collins wants a reader to take in thinking about why her being in love and reading Salinger would pardon the stains. (I also find the line "Pardon the egg salad stains, but I'm in love." to be very Salinger-esque.)

Here are some starting places for a poem to submit this month: