Rediscovery and "The Discovery of Sex" 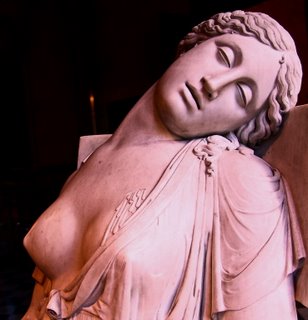 "The Discovery of Sex" a poem by Debra Spencer, (from Pomegranate, Hummingbird Press, 2004) was one that I heard read by Garrison Keillor on The Writer's Almanac and later went to the webite to find the print version.

Though its title says discovery, I'm pointing at the rediscovery that's in there for our June writing prompt.

In her poem, two adolescents (one the narrator) discover sex, as perhaps their daughter years later is discovering it somewhat by seeing them. And woven into that is the parents rediscovering something from their past, and the woman recalling her own mother calling to them to stop fooling around - the scene now renacted by their own daughter.

Sex is certainly one of the things that is always being rediscovered, both by young people who believe they have found something new, and rediscovered by older people who perhaps may have forgotten where they had put it - but I see no need to write only about sex when there is so much else to be rediscovered.

BIO NOTE: Debra Spencer invented her own alphabet when she was three. She wrote her first book in the second grade and went on to earn a BA from the University of California at Santa Cruz in 1972 and an MA from San Jose State University in 1988, where she won the Anne Lillis Memorial Scholarship for Poetry. In her desk she keeps a Bart Giammati baseball card, a fossilized shark’s tooth, the tuning key to an Anglian harp, and a piece of the Berlin Wall. She works at Cabrillo College as a learning disabilities specialist, and sings with Community Music School of Santa Cruz.

Sure - don't write about sex, but you put that photo on the page?
OK, so it's a cold marble statue - but still...